Over the coming half term holiday, 11th - 19th February 2017, the West Somerset Railway is running a diesel service which includes a trip to Snowdrop Valley.

The train leaves Bishops Lydeard at 10.30, arriving in Williton at about 11.00. Included in the ticket price is a bus service to Wheddon Cross. You can then either catch the park and ride bus (the cost of this is not included in your West Somerset Railway ticket) down to the valley or make your way on foot. Your bus will collect you from Wheddon Cross at 14.00 to meet the return train from Williton back to Bishops Lydeard.
Find more information and make your train booking on the West Somerset Railway website

While you are in Wheddon Cross, you can enjoy lunch (or maybe just coffee and cake, tea and scones or our lovely home-made teacakes) at Exmoor House – we run a pop-up Snowdrop Valley tearoom. Our food is something special: more details here.  And if you'd like to spend a few days on beautiful Exmoor and enjoy some of the other sights too, why not book a short break with us? We offer bed and breakfast, and dinner too.
More information about Snowdrop Valley, with regular updates, can be found on the Wheddon Cross website.
Posted by Rosi D at 11:55 No comments:

Snowdrop Valley is exactly that: a valley with lots of snowdrops. Tucked away on Exmoor in Somerset, just a mile or so from our guest house in Wheddon Cross, it's special because you can see the snowdrops flowering in natural woodland (many snowdrops walks are in a more formal setting such as parkland). 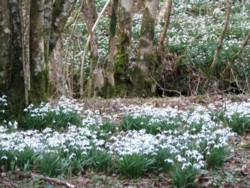 February is generally peak snowdrop season, although of course it depends mainly on the weather as to when the blooms will be at their best. Access to Snowdrop Valley is by walking, or by minibus. The walk, which takes you down to the valley and back up again, is very pretty. As you might imagine, it can be very muddy, so you need to wear wellies or walking boots.

The minibuses are organised by our local parish council. They run from the village car park (across the road from our place and next to the pub). You'll also find an information point where you can get directions and advice and buy snowdrop-related souvenirs. If the village car park is full, there is generally overflow parking available at the cattle market just down the road (except on market days).

In 2017 the road to Snowdrop Valley is closed from 28th January to 26th February inclusive, hence the park & ride minibuses. The park & ride service runs from 4th to 19th February, so on the other dates you can only get to the valley if you walk.

The Wheddon Cross village website has regular updates. You can also download a bus timetable and an information leaflet.

If you fancy a few nights' break on Exmoor to see the snowdrops, you can enjoy a relaxing stay at Exmoor House and enjoy our great food.
Posted by Rosi D at 14:07 No comments:

An Exmoor mystery: the wishing trees of Tarr Steps

If you've walked from Tarr Steps along the banks of the Barle river, you will no doubt have spotted a number of tree trunks with coins hammered into them. You might even have added a coin or two yourself.
Seen from a distance, you could almost imagine the trees to be scaly dinosaurs. I guessed that they must be 'wishing trees', but nobody I asked could confirm that, or tell me anything else about them.

Then the other week I spotted a blog post by Elke Koessling-Winzer at Exmoor4All .


She says:  'For centuries and across cultures, people have attributed trees with special powers. In some countries, trees are covered in red ribbons or notes, and throughout the UK, coins play a special role.  One of the money trees can be found near Tarr Steps on Exmoor.
The wishing tree is studded with coins, hammered in by villagers and tourists with the help of stones. People used to believe that sticking a coin into a wishing tree would pass an illness to the tree – and onto the person who pulled the coin out again.  The custom goes back to the beginning of the 18th century; one of them, an oak wish tree in the Scottish Highlands, gained fame when Queen Victoria visited it in 1877.

So far we have been unable to find out how old the wishing tree is at Tarr Steps...'

Some of the coins do look as if they've been there for a very long time. If anybody knows more about this rather intriguing mystery, please tell.

Fun and games at an Exmoor village fête

Every village on Exmoor does something to celebrate summer, the season of fairs and festivals. On the first Saturday in August – this weekend, in fact - is the Wheddon Cross and Cutcombe fête and dog show, which takes place on the village playing fields just a short walk from Exmoor House.
In the good old English tradition, a fête wouldn't be a fête without at least some of the following: china smashing, splat the rat, barbeque, tombola, Pimm's tent, fortune-telling and stalls selling books, plants and bric à brac. Most, if not all, of these are generally here, often with a few extra surprises too. Buy a ticket for the grand draw and you could win any of a wonderful array of prizes – one of which is dinner for two at Exmoor House.

We really enjoy looking at all the competition entries: there is always some fab baking (Frank won the best-in-show cup one year; the judges loved his goat's cheese flan), as well as great photos, very inventive crafts and of course luscious home-grown produce. Sometimes the competitions include a prize for the best scarecrow. No scarecrows this year, but I couldn't resist including a couple of pictures of some from a year or so ago.


Afternoon teas (not to be missed) are served at the village hall. After prizes have been presented, the fruit, vegetables, cakes – and so on – from the competitions are auctioned to raise money for village good causes. The auctioneer from the sheep and cattle market down the road does the honours and the pace is fast and furious. Snooze and you lose, as they say. Bidding is often fiercest, and prices highest, when it's time for the whortleberries to be sold (you may know these by one of their other names: bilberries, whinberries, blaeberries...).


If you're in the area, do come along and join in. You'll be made very welcome.

Because Exmoor has such a range of terrains (more in a later blog!) it has a big range of plantlife too. I'm going to concentrate here on some of my favourites, and haven't included trees because I'm also going to focus on them another time.
Early in the year the snowdrops in Snowdrop Valley - where else? - show that the land is starting to wake up after winter. Slightly later signs of spring are daffodils, primroses, alexanders, wild garlic, bluebells.
Gorse, with its sunny flowers and coconutty scent, can be in bloom at any time of year ('whenever kissing's in season' as the old saying goes) but is often at its best in late spring. Exmoor ponies love to nibble the flowers and stems.

Summer brings out the bell heather and ling on the high moors, which are home to luscious whortleberries as well; also known as bilberries, if you're a northerner like me. And, following on from the foxgloves, rosebay willowherb is everywhere. On riverbanks I love to see meadowsweet, also – an invasive import, but so pretty – monbretia.
By the coast you'll see, at various times of the year, sea purslane, wild fennel, teasels, evening primroses, mallows...
And I'll just briefly mention marsh plants, grasses and sedges, ferns, lichens – the latter a telltale sign of Exmoor's unpolluted air – and fungi including brightly coloured waxcaps.

All in all, Exmoor is a botanist's paradise!
Posted by Rosi D at 17:33 No comments:

Johnny Kingdom and David Parker visited our February pop-up tearoom the other year, and tried one of our most popular menu items: our home-made teacakes.
They had just visited Snowdrop Valley, while filming the TV series Johnny Kingdom's Wild Exmoor. The book of the same name, by David Parker and with reflections on Exmoor from Johnny Kingdom, was published in 2015 by Halsgrove.
On page 49, David says of our tearoom: '...the food, all home-baked... is fantastic. I'm partial to a toasted teacake in the morning, Frank's home-made ones put the bought variety into some sort of perspective'.
For an affectionate and individual perspective on Exmoor through the seasons, take a look at the book. You will also find our special teacakes recipe in there, but here it is now for you.
Ingredients (makes approximately 12 teacakes)
200g mixed dried fruit
1kg strong white flour
1 tsp salt
100g butter
100g sugar
500 ml milk
5g yeast
1 tsp sweet mixed spices

Rub the butter and flour together in a large mixing bowl until they resemble fine breadcrumbs. Warm the milk to blood temperature and add the yeast, then add the milk and yeast, as well as the mixed spice, sugar and salt, to the flour and butter mix. Stir it all together and knead, then add the mixed fruit and work it into the dough. Cover the bowl lightly with clingfilm, set it in a warm place and allow the dough to rise for about an hour or until it has doubled in size. Then divide into 150g pieces and roll each piece into a ball. Put these on a baking tray which you have greased and lined with baking parchment or silicon sheet. Let the doughballs rise for approximately another hour, then bake at 200C for fifteen to twenty minutes.
Enjoy the teacakes the traditional way: toasted, with plenty of butter. Or for something different and also rather delicious, try them untoasted, with clotted cream and jam.
If you'd rather have teacakes made for you, then do come and visit!


Combining a ride on a steam train with a visit to Exmoor’s beautiful Snowdrop Valley sounds like just the  ticket! This year’s Snowdrops and Steam days out on the West Somerset Railway are on February 16th, 17th, 18th, 19th and 20th.

The steam trains depart from Bishops Lydeard at 10.25 or Minehead at 10.15. You get off at Williton Station to join the special coach service to Wheddon Cross, arriving there around midday. To get to the valley itself, you can either walk (allow about 1 ½ to 2 hours; the paths are steep and can be very muddy) or travel on the snowdrop bus.

Your coach back to Williton leaves Wheddon Cross about 15.00, to catch the 16.45 trains to Bishops Lydeard and Minehead. Visit WSR for more information, prices and booking details (as I write this, some of the Snowdrops and Steam dates are selling very fast).


While you’re in Wheddon Cross, do call in to Exmoor House for some hot soup, home-made teacakes, a cream tea or a ploughman’s lunch…

And to see just why Snowdrop Valley is so special, take a look at these photos

On the Wheddon Cross village website you’ll find details of various walks to Snowdrop Valley; here are some examples.